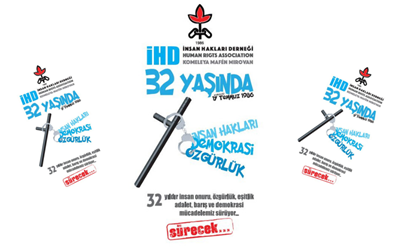 HRA was founded by 98 signatories on 17 July 1986. Among the founders were relatives of prisoners, intellectuals, authors, journalists, publishers, academicians, lawyers, doctors, architects, engineers and teachers. We are gratefully remembering those who passed away.

HRA, since the day it was founded, has stated that there is a democracy and human rights problem in Turkey, and has been fighting to solve these problems. The major reason why this lack of democracy and human rights is still going on is the insistence on official ideology. This ideology is based on a state formation consisting of only Turkish ethnicity and Sunni-centric Islam. It rejects other ethnic and faith groups. As 2013-2015 peace talks period was not finalised successfully, clashes re-emerged; and as a result, those who are in favour of official ideology and the current government headed for a more authoritarian regime, following the 16 April 2017 referendum of some constitutional amendments. Moreover, the referendum was conducted under the state of emergency conditions. Turkey moved into a new regime with 24 June 2016 elections, which took place under the state of emergency, lasting since 20 July 2016. The findings indicating the existence of manipulation, and the legal sub-structure that paved the way for manipulation will be controversial over a long time. This regime is based on a one-man rule and full of anti-democratic features. It is hard to name this regime at this time. However, we can state that it is obviously an anti-democratic regime.

Latest developments around the world have undoubtedly played a role in Turkey’s shift into a more authoritarian point. The crises caused by capitalism have led some states towards more conservative economic policies and more authoritarian tendencies. In such a period, international organisations have not been able to impose preventive measures against the states like Turkey. For example, although the attempted coup was quelled on 15 July 2016, just four days later the state of emergency was declared. The Council of Europe was a mere spectator and 8 months later it put Turkey on notice over Rights Record, but still did not fulfil its obligations accordingly. The UN Human Rights Committee did not take any action against violations of human rights caused by Turkey’s military operations both within its borders as well as in Syria and Iraq. These kinds of attitudes enabled countries like Turkey to turn into authoritarian regimes. The Capitalist modernity has failed to protect the human rights system it created. Developments show that human rights have been instrumentalized.

There are a lot to be said about the decline in human rights and democracy in Turkey. However, in the 32th year in which we are still struggling for human rights, we can make some very important recommendations and requests

1-    Turkey has to confront its past and actualise a true conflict resolution in order to be democratic. It needs a new peace-talks process after acknowledging the Kurdish Issue. Furthermore, there appears to be a need for a new political will which is to approve of the equal citizenship rights of the marginalized groups, particularly of Alevis.

2-    Besides the conflict resolution, Turkey urgently needs to have a new and democratic constitution. Unless a brand new constitution is made, the 1982 constitution, prepared by generals involved in the coup, cannot bring about any solutions even if with amendments. The current change, named as Presidential Government Model, has a very apparent feature; that is, it is simply an anti-democratic bossism.

5-    When looked back to political history of Turkey, we can see the process of building a democratic parliamentarian system since the days of the Ottoman Empire. The disruption of this process by one-man rule is a setback. The Government ought to understand that it cannot sustain the official ideology and confront its problems just as other developed countries. In this respect, Turkey’s problems can only be solved in a democratic system. A country with a population of 81 million is not likely to solve its problems without the separation of powers, without offering democracy for everyone or improving its local democracy.

6-    The principle of separation of powers shows itself within impartial courts. Without a judiciary strictly devoted to the rule of law, it is impossible to bring about justice.

7-    Another important issue is that the state-sponsored illegal organisations have not been disbanded yet. After the counter-guerrilla fact that showed up in the past, Fetullah Gülen’s group within the state went as far as attempting a military coup, which is a clear indication of the danger. However, in order to prevent new illegal groups from substituting for the eliminated ones, it is obligatory to form a democratic administration. In addition to this, the culture and policy of impunity must be ended. Public servants that commit to crime should not be insulated against law.

The struggle by the human rights defender under the roof of HRA will last within the scope of freedom, equality, justice and demand for peace; and the fight for the democratisation of Turkey’s regime will be carried on.