DİYARBAKIR - The 6-month balance sheet report on rights violations in North Kurdistan, prepared by the Amed Branch of the Human Rights Association (IHD), has been presented.

Deputy co-chair Rehşan Bataray said that the government’s insistence on authoritarian policies based on violence and conflict in Kurdistan people are faced with a terrible situation that deeply affects social life.

Bataray cited violations of many types, from torture to harassment, from prohibitions and interventions against the right to assembly and demonstration to freedom of thought and expression, from violation of freedom of the press to violence against women and children, to violations of economic and social rights.

Stating that the Turkish judiciary has lost its neutrality, Bataray added that women politicians and activists have been detained especially in recent weeks, and that the freedom of association is clearly being violated along with personal security and freedom.

Lawyer Bataray also said that an increase in domestic violence against women was registered during the pandemic and especially in March and April.

"The lockdown and the release of men who committed violence as a result of the changes made to the Law of Execution meant the rates of women being exposed to violence increased. With the absence of alternative protection mechanisms, discussions have been initiated regarding the annulment of the Istanbul Convention, which was signed to prevent domestic violence against women. To withdraw from the Convention at a time when the situation is so serious means to approve violence and murder of women."

Bataray said: "The illegal practices and violations continue in Imrali High Security Prison. The Imrali system imposed on Mr. Abdullah Öcalan and the other prisoners was maintained unchanged with the exception of a family visit held in March 2020 and a phone call during the pandemic process. We would like to draw attention to the continuation of the isolation system, which we describe as a serious violation of rights. Öcalan, who would be one of the main actors in a possible peace process to solve the Kurdish question through dialogue and negotiation, should be granted the opportunity to fulfil his mission. The isolation imposed on him must be ended immediately."

Bataray pointed out that freedom of expression and association and the banning of meetings and demonstrations with the arbitrary decisions of the governorships, continued. In particular the weekly meeting organised by the families of the disappeared and the IHD in Kosuyolu Park Right to Life Monument has been banned since 1 September 2018.

Bataray also underlined that the cemeteries where the graves of the guerrilla martyrs are being destroyed and demolished during military operations. The lawyer added that the destruction of cemeteries has no place in humanitarian law or religious belief.

Underlining the need for a non-conflict environment in order to solve the Kurdish issue through democratic and peaceful means, Bataray said: "We demand the abandonment of policies that lead to the occurrence of human rights violations, we hope that this conflict environment will end as soon as possible to allow a new solution process to begin again.”

Among the violations of rights those related to torture. Nearly 100 people were tortured, according to the report.  At least 2 people were subjected to torture and ill-treatment while in custody.

61 people were subjected to torture and ill-treatment outside of detention places (street-house raid).

22 prisoners were subjected to torture and harassment in prison. 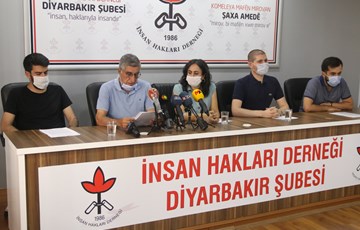